A pony is a childhood dream, A horse is an adulthood treasure.
~ Rebecca Carroll

Guess who stays on? 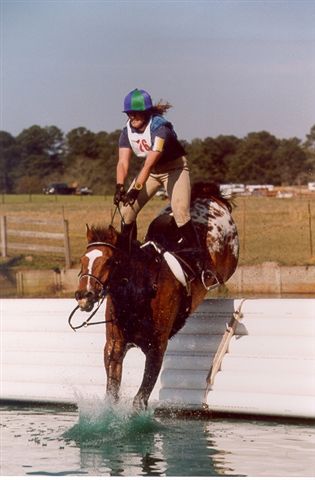 Our First picture appears to be from the cross country section of a horse trial. This horse's powerful jump has lifted his rider out of the tack. Although the rider is maintaining a straight line from bit to elbow she is not advance enough rider for an automatic release and should go back to a using a short crest release. If she were my student I would shorten her stirrups one hole and have her trot over ground poles with out stirrups until she learns to stay closer to the saddle. Her expression is stoic and she is looking up for her next fence. Her back is not roached as is the habit of most Event riders due to the fatigue of cross country.

Her horse's keen alert expression indicates he enjoys his job. He is of good weight but his coat appears to be wet. Their turnout is typical of Event riders on cross country, I like that she has kept the garish color accompaniments to a minimum. I consider the large watch to be distracting to the over all presentation. 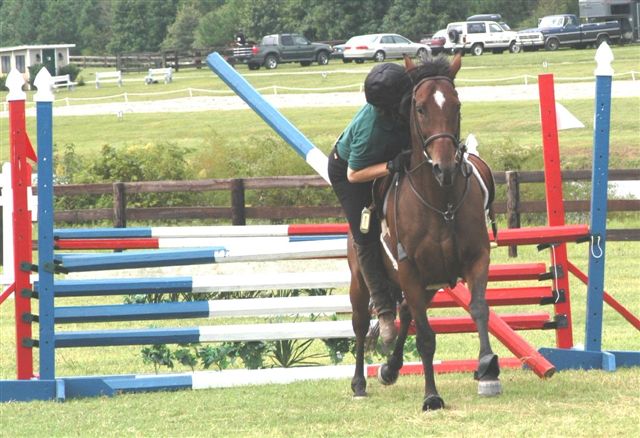 This photo was taken a fraction too late to adequately review jumping style and for that I am thankful. This rider appears to be practicing some sort of trick-riding for which she is clearly not prepared. She needs sit up, put her shoulders back and focus on where she is going. In her current state, it will be hard for her to stay astride her horse, much less make it to her next fence. It would also be beneficial to keep one leg on either side of the horse and preferably keep at least one, if not both, feet in the stirrups.

This pair's turnout is sub-par even for a schooling combined test. I recommend that the rider invest in a new pair of half-chaps and polish her paddock boots. Removing the price tag from her bat would also be a nice touch. If she continues to insist on pulling the bit halfway out of her horse?s mouth, I suggest that she polish it.

It is clear that this horse is quite displeased and distressed with his rider's dismal equitation. I only hope that if and when his rider fell off, he ran to the trailers and made her walk a long way to catch him. 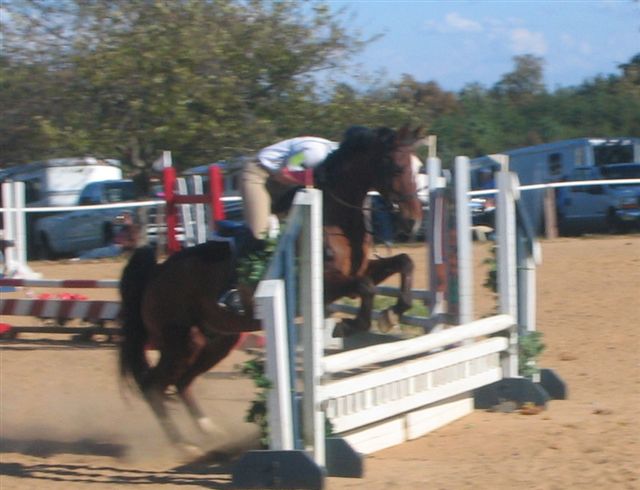 This rider appears to be looking for her lost crop.  If she were my student I would have her give up her credit cards and join the Peace Corp; anything to encourage her to concentrate on her riding and not be so materialist over such trivial matter as a lost crop.  She is maintaining a straight-line from bit to elbow and is using the crest release for what it was intended for, staying on the horse.  Her brand new Ariat boots are too stiff to allow her to bend at the ankle.

Her horse on the other hand appears to be quite focused on his job.  His knees are up and is doing a great job of ignoring her rummaging around.   It is hard to tell from this picture but it looks as if he has some type of funky body clip job and his mane needs to be braided.  His weight is good and it is obvious he is at a barn where he gets excellent care.

The saddles pad it too big and pea green emergency medical card is distracting.  The USEA must have realized their fashion error as they have issued white cards for 2005. 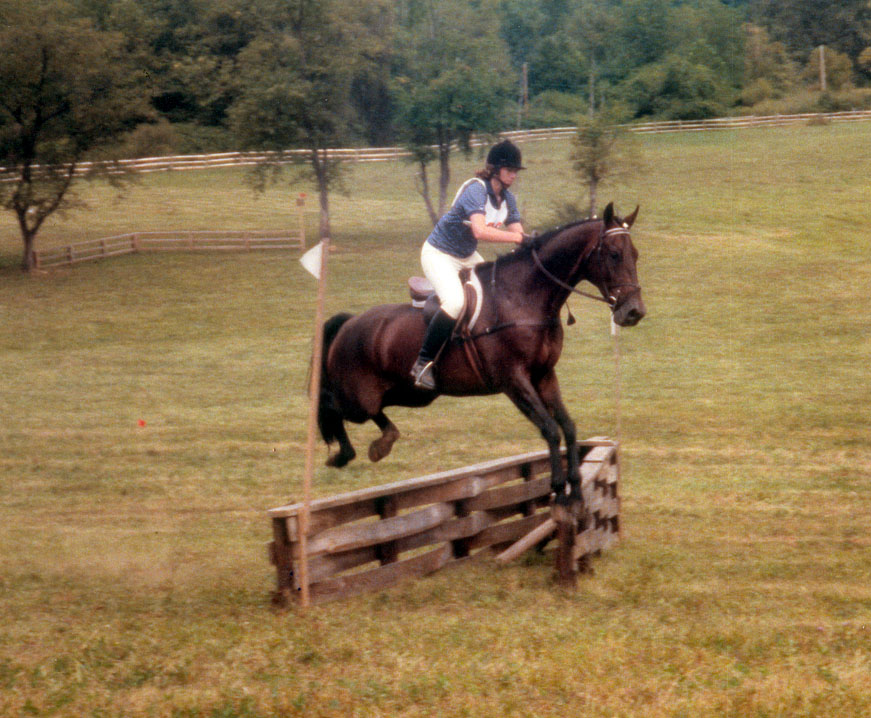 When comparing this rider with the others in this series, a song comes to mind "One of these kids is doing her own thing", by that I mean it is clear that this rider has no immediate plans to dismount her horse.  By submitting this picture to THIS forum I suspect this rider need some positive reinforcement about her riding skills, so here it is.   "You are doing job of staying with the horse over an awkward jump".  She does not have a straight line from bit to elbow and is trying to give the release that I have perfected know as the chicken release.  She's pinching with her knee and her leg has swung back but when a horse takes a jump like this it is every man for himself.

This horses jumping style is not unlike some horses that I have had in my barn.  His has his attention split between jumping and his rider.  Raised cavalities might give him focus and teach this horse to bend his knees.  He is of good weight and has a shiny coat.  The white tape is a give away that she did the braids herself (as Event rider often do) but dear reader she made the effort.  Once she gets more practice with braiding she will not need the white tape to keep them in.

Her boots are too short and lack polish.  Her hair is out of control and that old fashion chin strap is ugly.

If you guessed riders 3 & 4 you would be right, they stayed on to fall off some other day.

Oops! This site has expired.

If you are the site owner, please renew your premium subscription or contact support.